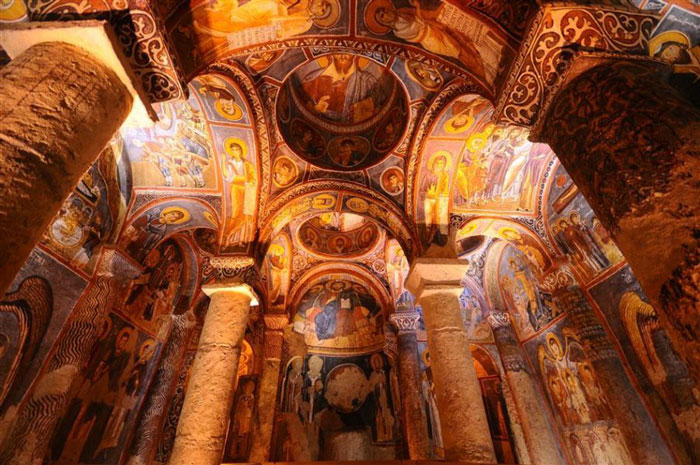 Goreme Open Air Museum has been on the list of UNESCO World Heritage Sites since 1984, and was one of the first two UNESCO sites in Turkey.

Goreme was inhabited as early as the Hittite era, circa 1800 to 1200 B.C. and later sat uncomfortably on the boundary between rival empires; first the Greeks and Persians and later the Byzantine Greeks and a host of rivals. This precarious political position meant that residents needed hiding places—and found them by tunnelling into the rock itself.

In the 2nd century AD there were ascetic monks who had adopted seclusion alone in the Cappadocia region, especially around Göreme. Although they were independent of monasteries and churches, they were an important social community. What made Cappadocia the centre of religious thought and life in the 3rd century was the presence of clergy with powerful character.

In the following century, the region was known as the hometown of the three great clergy. These were the Bishop of Kaisareia, Basileios, his brother Gregorios of Nyssagia and Gregorios of Nazianus. Basileios, known as the ‘Great’, returned to his hometown, Kaisareia, the headquarters of the Cappadocia region, to devote himself to the monastic life. He was also effective in spreading the monastery life collectively.

A monastic life was present intensively in Göreme from 4th century AD to 13th century. There are churches, chapels, cafeterias and seating areas in almost every rock block. Today’s Göreme Open Air Museum is the place where this education system was launched. The churches were painted with two types of techniques. The first one is painting directly on the rock surface and the second one is fresco-secco (tempera) technique. Topics covered in the church are taken from the Bible and the life of Jesus Christ. The Göreme Open Air Museum houses the Girls and Boys Monastery, St. Basil’s Church, Elmalı Church, Saint Barbara Church, Serpent Church, Malta Crusader Church, Dark Church, Saint Catherine Church, Çarıklı Church and Tokalı Church. The archaeological site was opened to visitors in 1967.