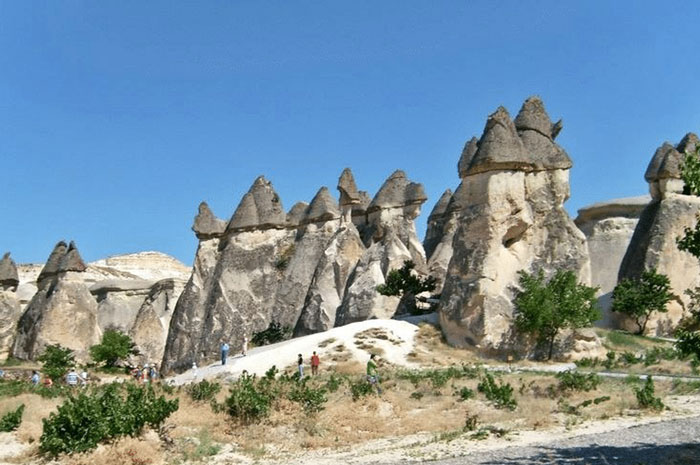 Pasabag, formally known as Monks Valley, is located just a few kilometres outside of the village of Goreme.

If you’re wondering why these unusual rock formations are called fairy chimneys, it’s because the early inhabitants of Cappadocia believed that these were the chimneys for the fairies who lived under the ground.

Highly remarkable earth pillars can be seen here, in the middle of a vineyard, hence the name of the place which means: the Pasha's vineyard. Pasha means General, the military rank during Ottoman rule and it is a very common nickname. This site is also called Monks Valley by the Westerners. The name was derived from some cones carved in tuff stones which stand apart. Currently, there is a vineyard and a number of tuff cones standing right next to the road.

Some of these cones split into smaller cones in their upper sections, in which stylites and hermits once hid. The hermitage of Simeon monks was also here. A chapel dedicated to St. Simeon (Simon), and a hermit's shelter is built into one of the fairy chimneys with three heads. The entrance of the cell is decorated with antithetical crosses. Saint Simeon was living in seclusion near Aleppo in the 5th century, when rumours that he made miracles started to spread. Disturbed by all the attention, he began to live at the top of a 2m high column, and later moved to one 15m in height. From there he only descended occasionally to get food and drink brought by his disciples. The hermits of Cappadocia distanced themselves from the world by cutting into fairy chimneys rather than living on top of columns. They hollowed out the chimneys from bottom to top creating rooms at 10-15m high.